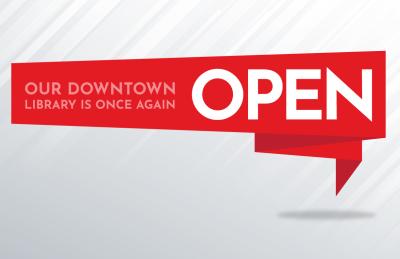 Final cleaning and restoration work has been scheduled following a fire at the Downtown Cedar Rapids Public Library.

The Downtown Library will close September 28, 29, and 30 while the work is being done. The library will no longer be closed Nov. 11 for an all-staff training day that had been planned.

Baby & Toddler Story Time and Chess Club meetings scheduled Sept. 28 at the Downtown Library have been cancelled. The Ladd Library will remain open as usual during the closure.

At approximately 3:45 pm on Wednesday, July 27, a fire broke out in a light fixture above the Commons of the Downtown Cedar Rapids Public Library. The building was safely evacuated with no injuries.

Though the fire was quickly extinguished and there was minimal damage to library materials, there was extensive smoke residue in the building, as well as fire retardant and water from sprinklers which went off above the Commons. After a professional team from SERVEPRO cleaned and restored the majority of the building, including books, computers, air ducts, and carpets, the library initially reopened Sept. 1.

Stay Up to Date!

Get the latest updates about what’s happening at the library.
Sign Up