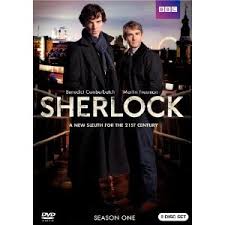 Sherlock is a smart modern retelling of the classic Doyle stories about the brilliant Sherlock Holmes and Dr. Watson.

Fans of the original stories won’t be disappointed, this series is like a love letter to the devoted but it is still exciting and accessible to anyone who hasn’t read them. You might miss some jokes though. The stories themselves are changed to make sense in the modern world but are treated with reverence. The acting is a treat to watch, Sherlock and Watson are very well cast and the smaller parts of Mycroft Holmes and the infamous Moriarty really bring personality to the stories. There are only three episodes with a brutal cliffhanger ending but they’re each about 90 minutes. The second season is set to premier on PBS’s Masterpiece Mystery in May.