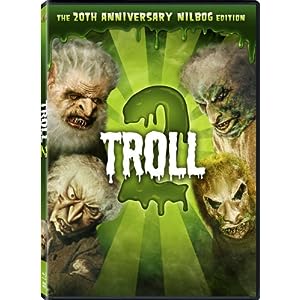 So why on Earth would I recommend Troll 2? Because it’s widely considered to be one of the worst films ever made, it’s even the subject of the documentary Best Worst Movie (which the library also owns). Most of the crew, including the director and screenwriter, were Italian and spoke very little English. The actors who showed up to be extras were cast in the lead roles. This adds up to one awesomely terrible movie but it is so bad that it ends up being wildly entertaining.

The story starts with a little boy named Josh who is being visited by the ghost of his Grandpa. For some reason, Grandpa is obsessed with goblins and keeps warning the boy about them (note that there aren’t even any trolls in this movie). The family leaves for vacation to a remote town called Nilbog (which is goblin spelled backwards, omg!) where they are assaulted by vegetarian goblins planning to turn them into plants and eat them. Throw in some terrible goblin makeup and a baffling love scene and you have one of the worst movies I’ve ever seen. Highly recommended for anyone with a sense of humor.