The Night Circus by Erin Morgenstern

The Night Circus by Erin Morgenstern 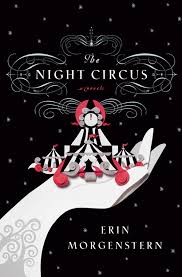 The Night Circus is the debut novel by Erin Morgenstern. Set at the turn of the 19th century, two master magicians make a wager on who can train the better student. They separately raise two children, training them for this mysterious contest. The arena is the magical night circus. This circus appears at night without announcement, moving from city to city, all over the world. The magic tricks and fortunes told at the circus aren’t illusions and the circus captures hearts wherever it goes. The two dueling students, Celia and Marco, begin a contest with repercussions that reach far beyond themselves.

This book is more like a sensory experience than a regular story, you can almost smell the caramel corn in the air while you’re reading it. The writing is beautifully done. The circus is so enchanting, you can almost forget about the central conflict and romance. This book is for readers who love a heavy atmosphere in their stories and aren’t as concerned with a fast plot. The characters themselves are intriguing and mysterious but the circus really steals the show. Highly recommended.