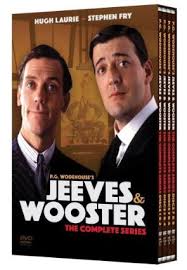 Jeeves and Wooster is an award winning television series based on the beloved stories of British author P.G. Wodehouse. His stories are the original source of that stereotypical butler named Jeeves. In this series, a young British aristocrat named Bertie Wooster (played by Hugh Laurie) hires a valet named Jeeves (played by Stephen Fry). Bertie is a bumbling wastrel with too much money, constantly getting himself in to trouble with his family, friends, and local law enforcement. Jeeves arrives and puts everything in order, managing to extract Bertie and his ridiculous friends from multiple poorly made engagements to society girls and talking them out of legal trouble with unflappable finesse. The acting and writing are fantastic, Laurie and Fry are always wonderful together and they perform Wodehouse’s deadpan jokes perfectly. Jeeves’ facial expressions alone are hilarious. You must enjoy dry British humor because this is about as dry as it gets. We own the complete series on DVD.